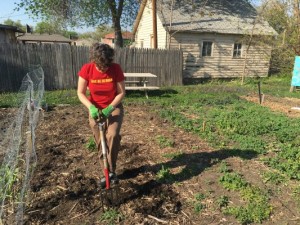 The landscape in suburban Lincoln is a bit different from the dry, cactus-covered desert of Albuquerque, New Mexico where first-time Community Crops gardener Courtney Lawton called home until 2012 when she moved to Nebraska to get her Ph.D. in English at UNL. Always an avid gardener, with a growing history of tomatoes, zucchinis, corn, and even lush lavender bushes, she was intrigued by the pretty, verdant garden by First Presbyterian Church. After doing a little research, she found that “if you don’t have enough space or enough resources, they’re very likely to give you a spot. It has to do with making gardening accessible to people who don’t have space and money to garden and who also need the food to eat.”

“It has to do with making gardening accessible to people who don’t have space and money to garden and who also need the food to eat.”

Constrained by yard space and wanting to grow more spacious food than her two 4 x 4 front yard planter boxes could handle, Courtney signed up to garden for the 2016 season at Community Crops’ 14th & Hudson garden location. By April, she had already planned out her plan of attack: “I want to farm the Three Sisters which are beans and squash and corn…The way that blue corn grows is it doesn’t grow very well in long rows. It grows well in these little squares so I’m going to make what are called waffle gardens. Each one of the plots is 10 x 10 so I’m going to divide into 5×5 areas so I’ll have four squares in each square and each of those squares will have a different crop in it.”

I want to farm the Three Sisters which are beans and squash and corn. 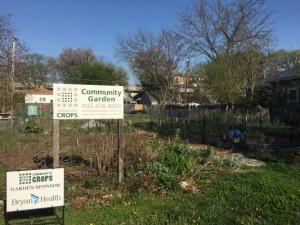 The trick, she says, is to be conscientious of the soil makeup and grow complementary vegetables. For example, “Corn is very nitrogen demanding—you need nitrogen rich soil,” she explains, “and beans are a nitrogen fixators and so what you do is you plant the corn and beans in the same place because they complement each other. They also tend to come to fruition kind of at the same time. If you plant summer squash, it’s going to be done by the time the beans are done. But everything is going to kind of ripen in this rolling fashion so you’ll always have something to eat but you have to be really aware of germination.”

In true, New Mexican fashion, Courtney plans to plant a variety of chili peppers—sandia hots and some big jim green chili—just enough to freeze along with the pumpkins she plans to plant. A knowledgeable canner, she also plans on making and canning spicy beans for future use. Courtney is excited about the diverse community within her garden. Familiar with the traditional foodways of the Native American communities in Albuquerque who “grow corn and squash and beans and chilis,” she likes the idea of coming out to the garden and seeing an unfamiliar plant. Now she will be able to grow the comfort foods of her childhood, just like her gardening neighbors!

Find out how to winterize your garden using a cover crop: