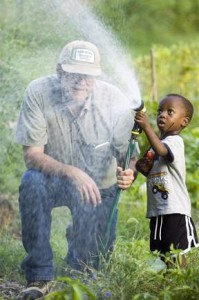 World-renowned soil microbiologist and sustainability expert, John Doran, has dedicated his life to meeting the needs of people and taking care of the earth’s resources. As someone involved with Community Crops since its inception, he has contributed his knowledge, time, and funds to help create a community in which not only vegetables flourish, but people as well. John’s main priority is to promote stewardship awareness within the Community Crops gardens.

In the end, the bottom line is to love one another and to care for the earth.

Originally hailing from the east coast, John moved to Lincoln in 1975 with his wife Janet to work for the USDA. After winning an Onassis International Prize for the Environment, John created the REAP Fund, a charitable gift fund meant to sponsor local efforts for sustainable and healthy practices. In 2003, John partnered with Community Crops to establish their first garden plot at 23rd and P Streets. He helped transform the empty lot, used as a common dumping ground, into a thriving community garden. With this success, the next year John coordinated the creation of a new site on the property of his local church.

Each garden is like a little oasis in Lincoln.

This site, the Antelope Community Garden, has undergone many changes since its first season. Due to diverse backgrounds, the gardeners in Antelope Community Garden were faced with the challenges of different gardening and cultural practices. When encountered with excessive water usage problems, John and his team worked with the gardeners to reduce the cost of water per year by 85% by adding a drip irrigation lines complemented by rainfall collection. John also found that salty compost was a main culprit for lack of vegetation : “Green beans are the most sensitive crop to salts so if you can’t grow green beans in your garden, it’s a good likelihood that you’ve got a salt problem.” He developed a salt meter that could be worn on the gardener’s belt to test the soil right on the spot. John reminds us that, as a technology-driven society, “we get carried away with so much complicated paraphernalia that sometimes the technology we’re using is way more than we need to really get the job done and understand what’s going on.”

And we went to drip irrigation lines so that we’d reduce the dependency. Again, meeting the needs of the people but also taking care of the earth.

ow-tech sustainable practices, John also promotes gardening together as the foundation for larger cultural conversations. John recognizes the success of Community Crops and has lots of hope for the organization’s future: “Crops has been growing tremendously, these little oases, one at a time.” The value of Community Crops, for John, rests in its ability to bring together people from all over the world into small garden plots to set aside their differences and work together. John highlights this diversity when asked to talk about the uses to which gardeners put their food. Not only do they share excess food with each other, but in the past they have donated crops to Lincoln’s distribution center for produce for food kitchens. “The bottom line is helping us all. Not only to love one another,” John says, “but to care for the earth. It’s not too difficult.”

Hear more about Antelope Garden’s drip irrigation system that John helped implement to reduce water usage, conserving our resources one watering can at a time: